Trimble was commissioned, in 2006, to develop and Implement a Land Information System for the Government of Belize’s Ministry of Natural Resources and Immigration.

Landfolio® was used to automate and integrate Belize’s public land records and cadastral maps in the Surveys and Mapping, Valuation and Land Registry Departments, under a single software platform which was subsequently expanded to include the departments of Physical Planning, National Estates, and Inland Revenue, as well as to six district offices located throughout the country.

A fully functional and integrated national land administration environment was developed, which in 2013, showed significant reduction in the average time to register a property transaction and a substantial increase in revenue from land fees and taxes.

The land tenure clarification activities generated additional work for Land Registry in terms of maintaining records and providing various services to the public. Land Registry didn’t have the capacity to handle the increased workload derived from the urban adjudication activities, as well as managing the new business processes and procedures of the land administration environment implementation (Trimble® landfolio®). This meant that the Ministry of Natural Resources and Immigration needed to hire more staff but as budget resources were not readily available, this took additional time.

Trimble worked with the client’s existing team to support them in operating the system – Trimble also scheduled additional on-site time to assist the client in the day-to-day operations. As the client’s team expanded the amount of time required on-site by the Trimble team was reduced as confidence and capacity in the system increased.

The client had not anticipated from the onset of the project, that ongoing capacity development and staff training was needed. This meant that a rigorous and repeated training programme was required. The work ethic of some of the staff was lacklustre, and there was very little accountability by the supervisory team. As such, participation in the training curriculum provided by Trimble was sporadic. This had a negative impact on the speed with which the solution was integrated into the daily operations. The client did instigate management changes which provided much-needed
structure and oversight, however, this did not occur until late in the project lifecycle.

Trimble worked with the client and the Inter-American Development Bank to source and allocate additional funds for supplementary training. To deliver the training cost effectively and to embed greater sustainability, Trimble revised the original training approach to include a train-the-trainer programme. This resulted
in “super-users” who provided training and also Tier 1 support to the user community – both of which increased confidence in the system. The addition of supplemental resources also provided the Ministry with the opportunity to revamp the workflow strategy within the Department. Trimble also worked with the Ministry
to create specialised work groups with knowledge of particular aspects of the land administration business. This has been one of the most impactful reorganisational efforts and has led to the ability to deliver simple title transactions in as little as three days.

The corruption within the Survey and Mapping Department was pervasive and some of the staff found the new system and incorporated controls to be an unwanted obstacle in their activities, and as such focused on how to prevent its implementation. This internal divisiveness was not addressed until the management change within the Ministry.

Trimble worked with the Ministry to further enhance security of the data, the system and the overall operational environment so as to prevent manipulation of the system. By leveraging the Trimble landfolio environment, audit reports were easily created which identified the actions of particular users and/or system administrators. This facilitated Ministry decisions to remediate the points of corruption. Additionally, Trimble helped prepare “Procedures Manuals” to create a standard for utilising the system appropriately.

The parcel data that was created under a separate contract (not managed by Trimble) was found to contain errors – in some instances the data was in positional error by several metres. This delayed the integration of the numerous data sets to the parcel.

Trimble provided parcel-correction/remediation through field survey combined with least squares adjustment, to the newly acquired orthophotography, and updated the parcel identification numbers (PINs) on each parcel. This then served as the primary link to the parcel throughout the database.

The ICT infrastructure was inadequate to support the 200+ users that were accessing the system. The Ministry elected to utilise a local contractor for the system implementation and did not follow the specifications provided by the Trimble team. This resulted in an under-sized environment being installed. The challenge for
the Ministry and Trimble was that users’ perceptions were that “landfolio isn’t working”, when in reality the issues were ICT-related

Common law Conveyance (Deeds)
There are currently 20,776 deeds under the common law system.
Governed by the General Registry Act and Law of Property Act.

The Final Evaluation Report (2013) showed evidence of a significant increase in revenue generation as a result of the introduction of landfolio in general and the latest deployment of the system. 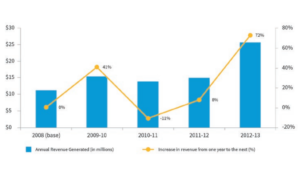 Regardless of the size of the project, politics will have an impact. This could be a result of legislative changes, elections, intragovernmental rivalries or other related issues. Whilst difficult to predict and/ or identify, they should be included in the project risk profile.

Data quality, availability and accessibility can significantly impact a project – not only from a cost perspective, but also from a project management/timeline perspective. It is important not to underestimate the level of effort that will be required to remediate, integrate and/or ingest the various and often diverse datasets that are held by the client.

The business process analysis and requirements gathering is not just about technology and software workflows. It is important to learn “why” things are done in a particular way or “why” a change is being implemented. Therefore, the inclusion of a diverse team of subject matter experts (both hardware and software skilled) ensures that all aspects of a client’s requirements are identified early in the project lifecycle and incorporated into the strategy and the delivered solution.

Trimble establishes a Land Management System for the Bahamas Department of Lands and Surveys.

Trimble establishes a Land Administration Solution. for the Anguilla Department of Lands and Surveys.