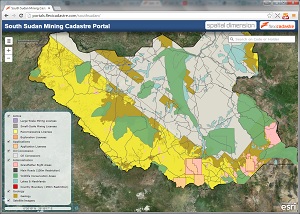 Speaking at the event, Hon. Stephen Dhieu Dau Ayik said, “I would like to take this opportunity to express my sincere appreciations and thanks to our Donors, Partners and Stakeholders; especially the Australian Department of Foreign Affairs and Trade (DFAT) for their continuous support to the Mining Sector; Adam Smith International for developing the legal and regulatory framework and last but not the least my special thanks to Spatial Dimension who worked very hard in a very short time to implement the Mining Cadastre System.”

The project included the implementation of FlexiCadastre* to meet the requirements of the Mining Act of 2012 and the Mining Regulations of 2015 as well as the launch of a view only map portal. The map portal is now available at portals.flexicadastre.com/southsudan/.

Spatial Dimension already hosts a number of public portals for government agencies. These portals provide a spatial view into the mining cadastre data and are intended to improve stakeholder communications, reduce corruption and improve transparency.

These portals can be accessed at www.spatialdimension.com/Map-Portals.